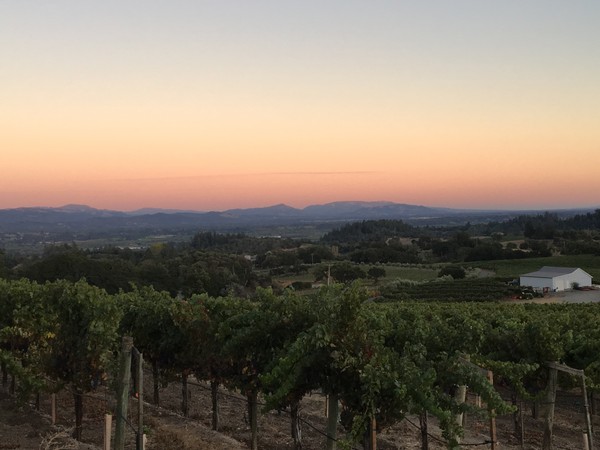 Because this wine is a blend of multiple vineyards throughout the Russian River Valley, to discuss the place would require more time than you’d care to spend reading. From higher elevation sites (outside Occidental) to warmer sites (Westside Road), to sites with very deep well-drained sandy soils (valley floor east side of the river, the wine is a composite of many different voices. Our approach to this wine is to try to find a blend that exemplifies what we feel about the Russian River Valley, and how we perceived the voice of each different vintage.

Carri and I love the Russian River Valley- it’s where our two lives became one, it’s where we began as winegrowers, it’s where we learned how to make wine, and where we raised our children (who are now adults). I can't imagine how our lives would have been were it not for the magic of Sonoma County, and the Russian River in particular. The place has a voice, that for us, speaks of the overarching power of nature, that has an undeniable sense of elegance, graciousness, and kindness. Such things may not be tangible, but the voice of this special place is very real, and we think in many ways it is the hallmark of wines that come from here, both our own and those that friends make.

To say we were “severe” in our selection of the lots for this wine would be an understatement. We had planned on producing our usual amount of this wine, but it didn’t turn out that way. Although we don’t make harvest decisions “by the numbers”, once the fruit is in the barn, we absolutely want to know as many data points as reasonably possible. There were three lots in particular that the numbers were as close to a “textbook” as one could want, and they absolutely hit the right aromatic notes and flavor profiles. But I felt like something was missing, and definitely nothing I could point to and say “that’s it”. I kept looking for something more from them- that “voice” that drives our blending and bottling decisions, and I couldn’t find it. And as I assembled preliminary blends for trials, I felt it all the more. They were “technically” spot-on, but spiritually lacking.

Eventually, and after less debate than you might think, we decided they just wouldn’t make the cut. As a result, we only bottled a little over 500 cases; our goal has always been to make the best wine we can, not the most wine we can. Was it the right decision? Well, we received a “95 point and Editor’s Choice” review from the Wine Enthusiast, so yeah, we think it was the right choice. And aside from that, to our palates, which is what guides us, it was absolutely the right decision, although a little validation never hurts. For those wondering where the wine that didn’t make the cut went, we can only say it is in a bottle which retails at a higher price than ours.

The final blend very much Russian River Pinot Noir – with the red fruit, black tea, and a bit of forest floor (“sous bois” if you’re fancy). It’s medium in weight, but we feel it’s got great balance, and the seamless elegance we prize. Since it is known primarily for being poured in restaurants internationally, we always like to comment on food pairings, and to date, pan seared halibut with beurre blanc, roasted onions, and carrots with Moroccan spices may be our favorite, if for no other reason than showcasing its flexibility. We expect it to offer drinking joy for a solid decade. Only 541 cases produced.