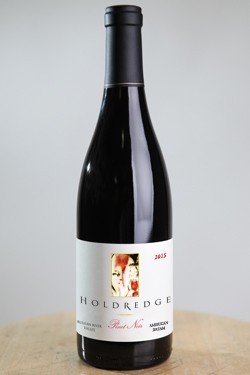 This is the second wine released by our son, Will Holdredge. Will started helping me when he was about 4, and his skills have really grown. He made his first commercial wine, from the 2015 vintage, in support of a fundraiser for an agricultural barn and pavilion at the Sonoma County Fairgrounds that was built in honor of the late Saralee Kunde. He called his wine “American Dreamer” because Saralee, whom he cared for very much (he learned to fish in her ponds), was a real believer in chasing and achieving dreams. Naturally, the grapes came from one of her vineyards, Swan clone from Catie’s Corner.

In 2016, he said he was going to be focusing more on flavor and less on numbers for his picking decision. It’s not unusual for winemakers to learn to focus on flavor and emotion instead of numbers and data; but it is unusual to understand why that distinction is so important at such an early age. Could be he was listening to the old man all these years as we drove around.

As we’d drive and check vineyards in 2016, I made a point of not saying anything about his grapes, and he wasn’t saying much either- he’d just taste and say “not yet”. Finally, he called the pick, and I thought he nailed it- the flavors were great and the grape chemistry was textbook perfect (not that I have much use for winemaking textbooks). It’s one of those moments I remember- seeing him recognizing flavor and not just sweetness. From there, the kid worked hard- doing his cellar work before school and in the evenings, and the wine shows his commitment.

From very early on in its life in barrel, I really thought where it excelled most was that it had a creaminess in the palate. While we strive to bottle supple wines, this one has always shown a very distinctive creamy texture- which is hard to explain, but easy to recognize when you experience it. In a way, the mouth reminds me of the “Strawberry Fields” we’ve released a couple times- that creaminess that swirls across the palate. The similarity ends there though; this wine is powerful, and jam-packed with black cherries, sassafras, boysenberry and a touch of black tea.

erhaps the part I like best is how the wine reflects where he was as a person in 2016. He made the 2015 when he was a junior in high school, and just a junior has a level of confidence, they now they aren't the "top dog"; and I thought th ewine was very deferential to the place- and really loved it for that reason., When he made the 2016, he ws a senior, and I think it shows that "I'm ready for the world, nothing can stop me" attitude a high school senior might have, it is exuberant and filled with the sense it is going places. It has the fruit to last a good while, and for now it loves a short decant. Drink now- 2024.