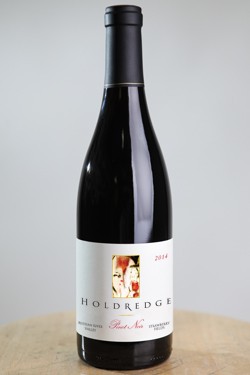 In May 2008, three successive nights of hard freezes wreaked havoc in a lot of vineyards. One of our favorites ("Mazie Rose") was  wiped out for all but about 1/3 a ton of grapes. We still picked them, and as they were fermenting, I had an idea I thought worth pursuing. I've had Pinots that were "fined" with Chardonnay lees, so we decided to take it a step further. When we empty barrels for bottling, there is about a gallon or so of lees (dead yeast cells) and a little wine left in each barrel. We always put it in kegs, and then when they settle further, the small amount of wine is something we like to bottle for ourselves- there's a certain creaminess and lees-y character I really love.

So we took all the kegs of Pinot lees from 2007, and fined (swirled them through) the 2008 the last week  it fermented, and then drained it directly to barrel- so there was some real heavy lees contact. It turned out to be an exquisite wine- basking in red fruit, particularly ripe alpine strawberries- tons of them. But the real kicker was the mouthfeel- it had a wonderful creaminess from the lees fining, and a silkiness if you will, almost a glimmering character- I really don't know how else to describe it.

We've had a lot of requests for it, and I tried making it another time and it wasn't the same, so it was never bottled. But in 2014, I decided to try it once more - and the result? "Baby, I'm back"! Oh man- red fruit, those strawberries (ripe ones mind you), all that creaminess I wanted, but with acidity that dances across the palate. Can a wine be lithe and full bodied at the same time? Apparently so. We only made one barrel of this wine. I really don't know how long it will age, but I think its going to be a fun wine to drink now or in a few years.